Throwing a Short Story at the Wall

I just submitted my short story "A Drink in Toulon" (A Kip the Quick Story) to Deep Magic magazine.

I've rarely attempted to Trad Pub anything, more interested in writing my epic fantasy and toiling away for more hours than I can count, but after talking about Kip the Quick's sequel with writing friend Steve, he suggested sending something in. And an idea was born.

Kip spends quite some time in the sprawling city of Toulon between the first and second book so it seemed like a good opportunity to delve into what happens there and touch on some of the peculiarities of noble life and how magic intersects.

Here's a tease of the opening...

(If you like it, check out the first novel in the series. The sequel is coming soon.) 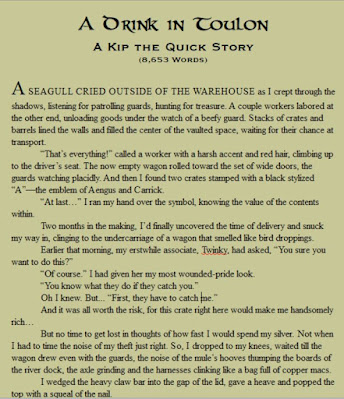