(This is a repost, of my review that appeared on SF Signal recently - reposted here for posterity) 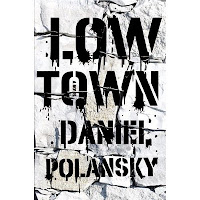 Low Town has lords with hidden agendas, willing to kill on a whim even as they smile behind veils of lace; gang lords with blood on their hands that riff poetry about their beloved deity; and artisans of magic that are powerless to stop the horrors of life. Low Town is a conundrum that tries to portray reality, with a touch of compassion, in an age where little was pretty.


In the great city of Rigus, the Warden is an addict and a drug dealer, ruthless with those that cross him, and an ex-agent of a force that serves as Rigus' highest defenders against crime and the underworld. He has a past, one that has made him who he is, though he is too busy trying to escape it to face what his past has done to him. Orphaned at a tender age, the nameless Warden survived the terrors of a plague and the horrors of humanity when pushed to the edge. He is rough, but tender and no matter how far he falls, he still has a heart hidden by scars. The Warden may not blink an eye at murder, prostitution or drugs on his turf, but he can not abide the death of an innocent. The Warden soon finds himself following a trail that leads into a past he would rather avoid and threatens his meager existence.

At times confusing in the time period, Polansky still draws the reader into a different kind of fantasy world where gun powder exists and magic is commonplace. There is some good world-building here and although I would have liked to know more about the setting, Polansky wisely keeps his focus.

Despite Low Town's inspiration from detective stories, it fails to excite as a mystery itself. It feels like all the right points are being hit, but the execution falls a bit short. It lacks what pulls a reader through a mystery novel: igniting their curiosity of whodunit while supporting the belief that you just might be able to figure out the solution. Perhaps a veteran of the genre would have anticipated the reveal that I missed. My attention was pointed more towards the Warden's personal struggle. This is the true mystery and promise of the book and I was left wanting to know more about how the Warden came to be the man he is.

While Low Town has a strong start, presenting a compelling character along with meticulous visual detail, it lost some of its power as the novel progressed. Polansky builds back up some of that tension as the book reaches its suitably horrific climax, but it didn't deliver the punch I was hoping for. Overall, Polansky shoots for brilliance, but sometimes misses the mark. Even so, it's an ambitious debut and I am intrigued enough to want to see what happens next in Low Town and and with its defender, The Warden.

I give Low Town 3 stars steeped in noir black in a book with motives that are shades of gray.
Posted by Clifton Hill at 8:55 AM